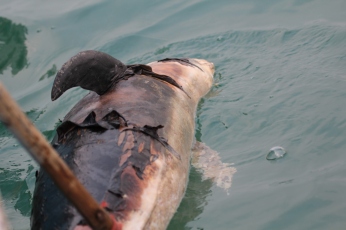 Yes, sadly, it was very dead.  And, very sadly and perplexingly, it is one of six dead dolphins and porpoises that we’ve* heard of and seen in the four days since we started doing this season’s surveys along the Trat coastline.  Four Irrawaddy dolphins (one pregnant), and two finless porpoises.  Given the locations of our sightings and reports, it’s most likely that these are all separate.

Neither the dead finless porpoise nor the dead Irrawaddy that we also saw from the boat showed obvious wounds or signs of emaciation.  From the reports of the other four, it doesn’t seem like any were wounded, either.  This is a high number of dead animals for such a short amount of time – potentially cause for concern.

Perhaps the culprit is some disease?  Without a vet and full necropsies, it’s hard to tell. Not yet sure how many of these guys have been fully studied, but hopefully some organ samples were taken.  We took some tissue samples from the ones in the water; would’ve been nice to bring the whole animal back, but that presented some challenges.

*“We” = the Trat Coastal Dolphin Project, with whom I’m collaborating for my work at this site.